In September 2012, an accomplished student of Law, Michelle Liguori, arrived in Egypt with hopes of becoming semi-fluent in Arabic, producing a law review article about Egyptian constitutional law, and knowing a little better what it might be like to be a diplomat.  She had been awarded a 2012-2013 U.S. Fulbright Student grant to conduct research on “The Supreme Constitutional Court, Religion, and Egypt’s Constitutional Transformation in Egypt.” Six years before, in 2006, she had received a Bachelor of Arts degree from Amherst College, and by the time she arrived in Egypt in 2012, she had just graduated from Harvard Law School with a Juris Doctor degree and taken her state’s bar examination, the test required for certification to practice law in the United States. She had pursued a Fulbright grant driven by her long-held interests in comparative constitutional law scholarship and diplomatic work, which she hoped to combine with a more traditional legal career. 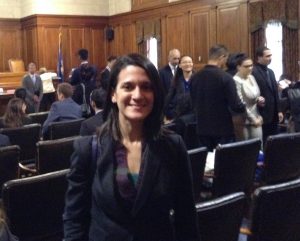 Admission to “the Bar”

As she started her grant, Egypt’s constitutional law and history were being written.  She had the opportunity to observe a constitutional campaign, a constitutional referendum and, from a distance, protests of various sorts.  Her daily interactions with Egyptians were among her most valuable resources. “What stays with me most, though, are the everyday conversations I overheard and participated in about the events in the country, whether it was an animated political discussion between my building’s doorman and his friend of which I tried to understand a fraction, a few short comments from a taxi driver as I was traveling home, or a leisurely evening sharing stories over tea with friends and colleagues,” she recalls.

“Beyond allowing me to become immersed in Egyptian life, the flexibility and resources of the Fulbright program provided me with many opportunities to pursue my interests and take on leadership roles,” adds Ms. Liguori. During her Fulbright grant, she formed a network for lawyers in Cairo, which included attorneys from Egypt, North America, and Europe.  They held semi-monthly meetings, during which they discussed matters of Egyptian and comparative law and current events, which gave her a unique opportunity to get to know Egyptian lawyers working in private, public, and non-profit practice. She also had many opportunities to engage with Egyptian audiences, on issues of constitutional law and more broadly.  She worked with Egyptian Fulbright alumni in organizing and moderating a panel discussion about the role of religion in the Egyptian legal system, gave lectures about American constitutional law at two Egyptian universities and the American Embassy, taught an advanced English course to recent college graduates, and delivered a somewhat random lecture about personality types and meditation to college students taking a Business English course. “Some of the most memorable moments from my Fulbright year came in the form of questions from students and other listeners, ranging from, ‘Why doesn’t the United States just get rid of the Second Amendment?’ to ‘Would you defend Mubarak?,’ and a comment from a young student that he was interested in how the United States became such a powerful country in such a short time,” she said. 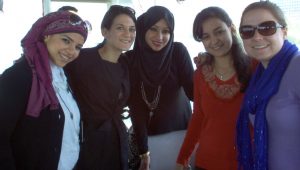 “What I value most from my Fulbright experience was the opportunity to spend time carefully understanding perspectives different from my own. The time I devoted to learning about the culture, politics, and history of Egypt has deepened my understanding of these facets of the United States and aspects of my own self. Going forward, I know my experience as a Fulbrighter will serve me well both professionally and personally.  My observations of the ongoing Egyptian constitutional process have provided me a wealth of ideas that I can turn into a law review article and have deepened my understanding of the challenges and rewards of diplomatic work.  And, I look forward to continuing conversations, both with friends in Egypt and fellow American Fulbrighters here in the United States, which always prove to enrich my life.” 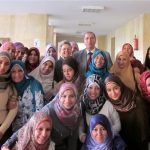 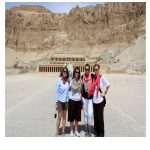