The Binational Fulbright Commission in Egypt (BFCE) hosted the following Receptions and Roundtable Discussions for academic year 2019-2020 Fulbright U.S. Scholars in Egypt that were attended by Fulbright alumni and friends of the Commission in the Humanities: 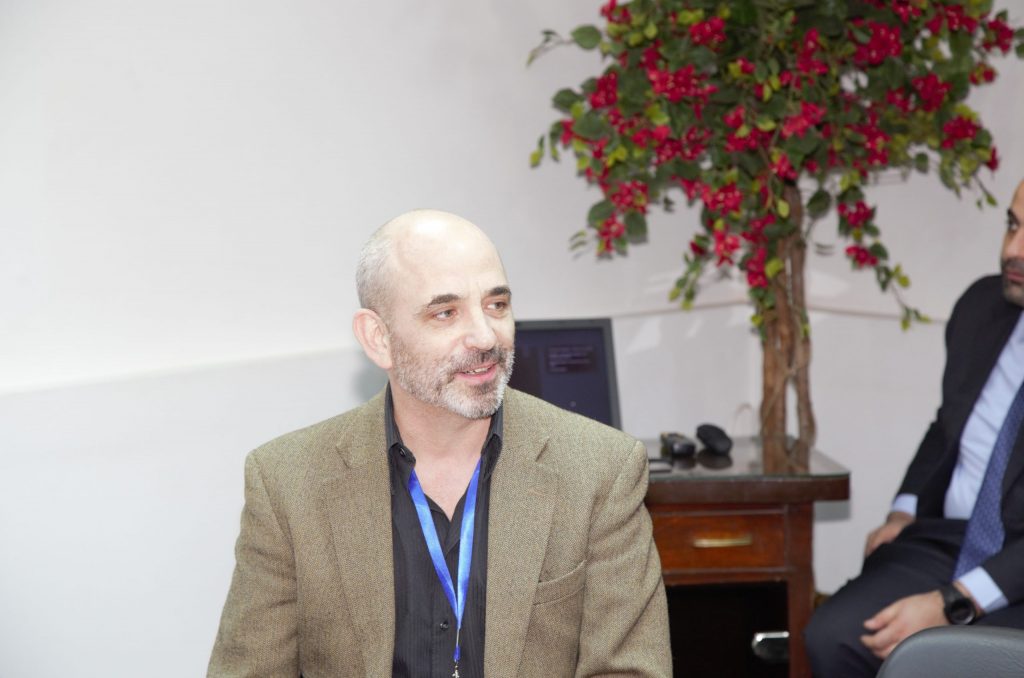 Dr. Richard McGregor, Associate Professor, Department of Religious Studies, Vanderbilt University, Nashville, Tennessee gave a talk entitled: “Recent Approaches to Islamic Studies in the American Academy”. The event was attended by alumni of the Fulbright Egyptian Student Program – Islamic Studies and graduates of Al Azhar University and the faculties of Dar Al-Ulum. For the last ten years, Dr. McGregor has served as Director of the Critical Studies in Islamic Traditions and Coordinator of the Arabic Language Program at Vanderbilt University. Dr. McGregor’s primary field of research is medieval Egypt and Syria, with a focus on public religious practice, ritual, philosophy and Sufism. His research has been supported by the American Academy of Religion, the American Research Center in Egypt, the German Research Foundation (DFG), the French Ministry of Education, and the Fulbright Program. 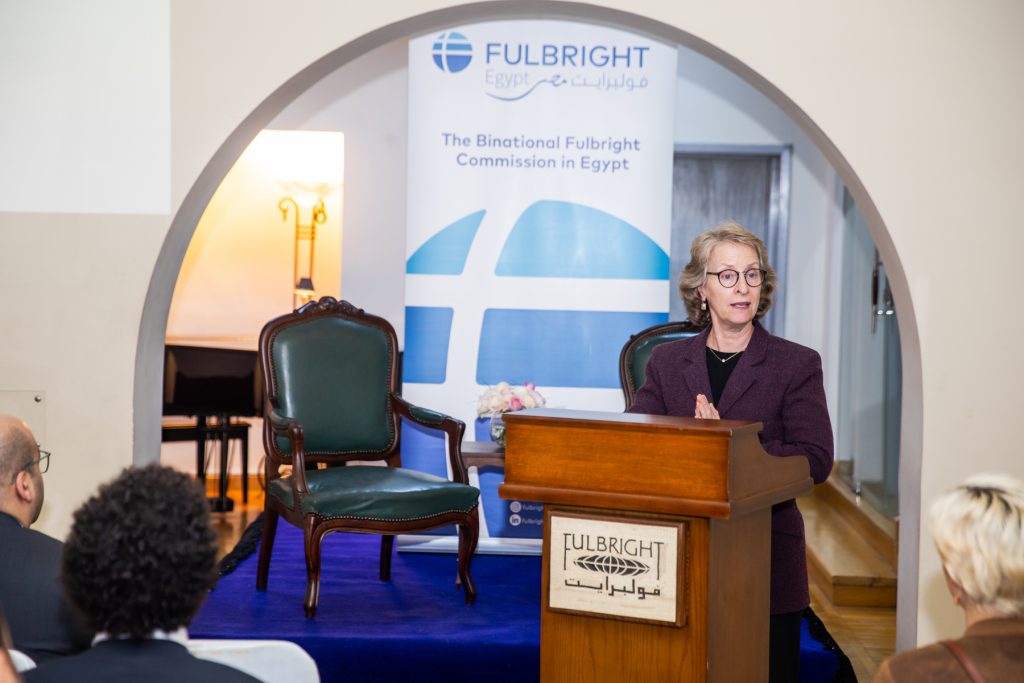 Dr. Clarissa Burt, Associate Professor, Department of Languages and Culture, United States Naval Academy, spoke on her current project which includes an examination of the diachronic sweep of literary forms which retell the pre-Islamic tale of the War of al-Basus as a productive matrix of Arabic cultural identity. Dr. Burt received her Ph.D. from University of Chicago in 1993 in Comparative Semitics. She has taught at numerous universities, including Illinois State University, DePaul University, University of Chicago, and Ohio University in Athens, Ohio, after which she taught Arabic literature at the American University in Cairo from 1997-2003. She joined the U.S. Naval Academy in 2004. Dr. Burt has enjoyed a number of research awards over the years including ARCE grants, Fulbright-Hays awards, a Kluge Fellowship at the Library of Congress and numerous small grants through her institution. At the United States Naval Academy, she established the Arabic Language and Culture program, and designed and built it into an academic major with five faculty members serving Arabic majors and minors in Arabic, as well as those who study for their language requirements. Dr. Burt’s research interests include all forms of Arabic poetry from all periods of literary production, in Fusha and in dialect. She has a particular interest in modern Egyptian poetry since the 1960s to today, including the work of the 70s poets, the Jaraad generation and younger contemporary poets. 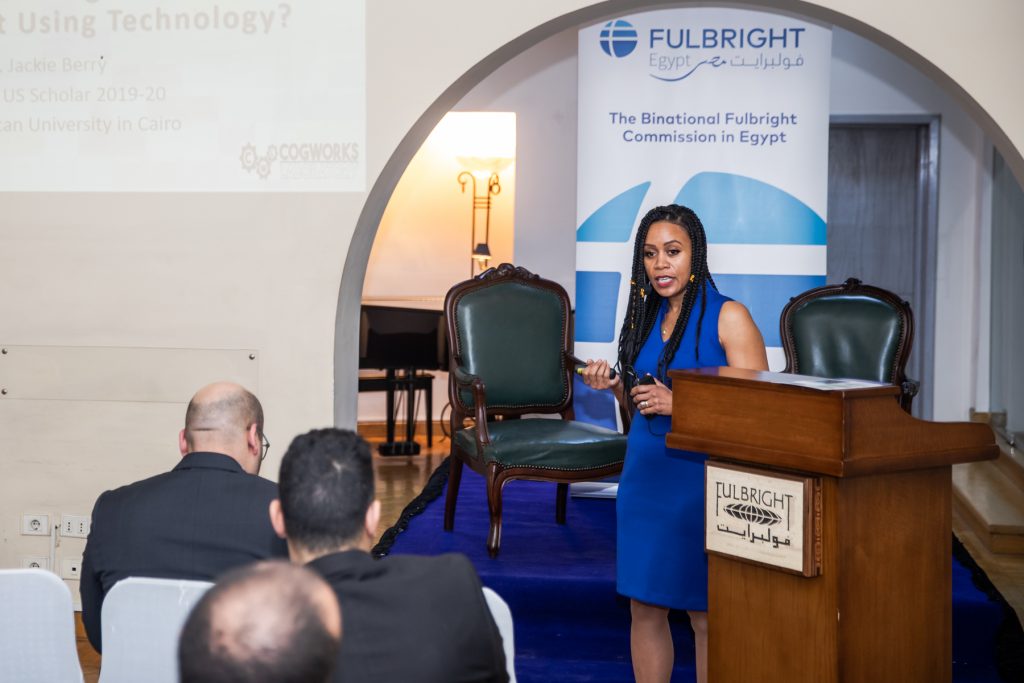 Dr. Jacquelyn Berry, Visiting Scholar, Department of Cognitive Science, Rensselaer Polytechnic Institute is a Cognitive Scientist studying visual perception, human-computer interaction and the development of expertise. She spoke on her studies of the impact of people switching between interfaces when they use technology day-to-day. Jackie uses Tetris as an experimental paradigm to study TetLag, which is the brief dip in performance caused by switching between two well-learned interfaces, e.g. iPhone and Android, to complete the same task. As part of her Fulbright U.S. Scholar award Dr. Berry is investigating whether Arabic-English biliterates will be better able to switch between different interfaces and configurations for the same task because they must regularly alternate between different orientations of text in reading, writing, and technology use in their daily lives. Dr. Berry holds a Bachelor of Science in Psychology, a Master of Science in Human Factors Psychology, a Master of Business Administration, and a Doctorate in Cognitive Psychology. She was the first person in the Psychology department to collect online research data at her home institution of Rensselaer Polytechnic Institute and the first African-American to graduate with a Doctorate in Cognitive Psychology from the State University of New York at Albany. 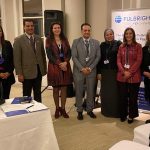 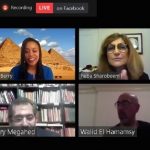