An accomplished chemist on a mission to inspire and empower female scientists in Egypt and abroad, Dr. Nawar believes that women have made contributions to Science from the earliest times in ancient Egypt. As a visiting lecturer at Snow College, Dr. Nawar is proud of her contributions. She initiated and introduced an in-depth course in the field of Chemistry, investigating the cultural wealth and scientific life in Egypt. The course was dedicated to increasing the capacity of students to think and work on a global and intercultural basis to foster mutual understanding, to developing global thinkers and to advancing the vision of opening minds to the world.  “Throughout my preparation, and while working together with the students, we shared a lot of experience. I think this is one of the best materials I have ever prepared and I will continue to use,” said Dr. Nawar.

More opportunities opened for Dr. Nawar when she was selected by the Council for International Exchange of Scholars (CIES) on behalf of the U.S. Department of State Bureau of Educational and Cultural Affairs (ECA), to attend a Fulbright Visiting Scholar enrichment seminar on “The Rule of Law – Human Rights and Justice” in New Orleans, Louisiana, in November 2013. The seminar was a part of the Enrichment Program implemented by CIES to enable scholars to better experience America and to further the Fulbright Program’s goal of increasing mutual understanding between the people of the U.S. and people of other countries. “This great opportunity provided me the chance to meet 67 Fulbright Visiting Scholars from 40 countries and share with them different opinions. We have continued our contact since that time,” Dr. Nawar commented.

Through the connections Dr. Nawar made during the Louisiana seminar and an Outreach Lecturing Fund (OLF) travel award, which she applied for and received, Dr. Nawar traveled to different U.S. Universities to give guest lectures and presentations on scientific issues, women’s role in scientific research and Arab/Islamic culture.

In April 2014, driven by her passion for empowering female scientists, spoke about her experiences during the Utah Women in Higher Education Network (UWHEN) Spring Conference, which was attended by 500 women. “Every woman, as a leader, has a story, and she wants to share it with the world. A woman is a woman everywhere! It doesn’t matter if you are young or old. I encourage all women who are interested in academic leadership to pursue the course,” Dr. Nawar said at conference’s Senior Leadership Session. 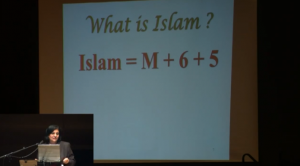 Dr. Nawar believes that the cultural exchange component of her grant was just as important as her academic contributions. She lectured on “Islam and Muslims” on the Eve of the Islamic Eid Al Adha feast, volunteered to spend time visiting and working with the local elementary school children on projects related to Egypt and Science, participated in an “International Day” while sharing traditional Egyptian cuisine and music with students and faculty, and organized (with the help of the Global Engagements Center) a festival to celebrate the Islamic Eid Al Adha feast with Arabian food, music and an exhibition of material on Egypt and  (for the first time on the Snow College campus).  “I received very good responses from about 180 people, including the Snow College President and his spouse, and 90 children from Ephraim Elementary School who enjoyed our festival. I thought I would feel lonely that day, but I had a good time surrounded by friends, students, colleagues and children,” Dr. Nawar recalls. Dr. Nawar was also invited to speak on “World of Islam” to almost 500 participants at the annual Snow College convocation of the Grace Tanner Lecture series. “After giving my lecture, I returned to my office and noticed a letter that had been slipped under my door. The letter was written by an anonymous student who expressed sincere gratitude for the presentation about the Islamic religion and thanked me for ‘changing their lives for the better’,” Dr. Nawar said.

Dr. Nawar says that one of the highlights of her grant was the 36th National Fulbright Conference arranged by The Fulbright Association in Washington D.C from Oct 2-6, 2013, for visiting scholars.  Other highlights of her trip include: participating in the 2014 Science Olympiad and being granted an Affiliate Faculty Position at BYU that allowed her access to the university’s resources, which she utilized to continue and share her research with SC students.

Dr. Nawar concluded her academic activities at Snow College with one final presentation on “My life is Chemistry” on Thursday April 24, 2014.  The following day she bid farewell to her students and friends at Snow College by inviting 60 of them to a traditional Egyptian dinner. In her invitation she said, “I want to share with you my happiness and sadness to end my Fulbright year.”

During graduation day at Snow College on May 3, 2014, Professor Gary Carlston, Snow College President, said, “This year, we have been honored to have Dr. Nagwa Nawar visiting as a Fulbright scholar. This is only the second time the college has had a privilege of hosting a scholar in residence and we have so enjoyed having Dr. Nawar this academic year.  Dr. Nawar was an influential leader of a Fulbright Science Circle and was recently conducted into the women in Science Hall of Fame in 2011. She is from Mansoura University in Egypt and has helped us experience her culture and learn more about Science, more specifically Chemistry, which is her area of study. Dr. Nawar, thank you for being with us this year.” 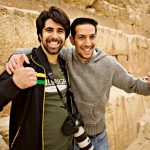