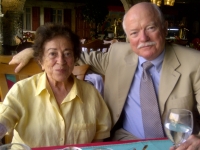 The Commission has hosted a luncheon in honor of its eminent arts alumna, Ms. Gazbia Sirry (Huntington Hartford Foundation AY1965-1966; National Museum for Women in the Arts AY1992-1993).  Gazbia is a painter of international acclaim:  her work is included in the collections of museums in Alexandria and Cairo, and in the National Museum for Women in the Arts in Washington, the Institut du Monde Arabe in Paris, and the Musee D’Art in Tunis.  Her 1960 painting, “The Kite,” was acquired by the Metropolitan Museum of Art in New York.  An enthusiastic supporter of the Commission’s cultural and educational activities, Gazbia contributed several pieces to an exhibition of alumni art that commemorated Fulbright’s 60th year in Egypt.  The Commission is proud to count Gazbia among its most distinguished “Fulbrighters.” 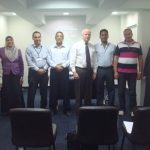 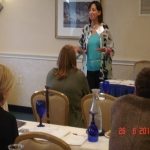