The Commission has conducted a pre-departure orientation for Egyptian Fulbrighters scheduled to participate in the AY2012-2013 Foreign Language Teaching Assistant (FLTA) program.  The orientation included a presentation on the “American Education System and Culture,” by Dr. Kenneth Suit, a film and humanities professor at Milligan College, and information on grant details by Ms. Dina Gaafar of the Commission’s Egyptian team.  Three recent alumni shared their experiences with the new FLTAs.  They are Ms. Amira Hegazy (Vassar College 2010-2011), Mr. Saad Kotb (Ursinus College 2010-2011) and Mr. Al-Mutazbellah Al-Abd (Birmingham Southern College 2011-2012).

The FLTA Program strengthens Arabic language instruction in American colleges and universities while providing Egyptian participants with opportunities to refine their skills, increase their English language proficiency, and expand their knowledge of American society.  The Commission extends best wishes to its AY2012-2013 FLTAs. 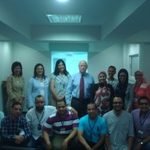 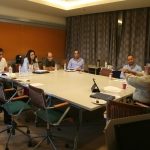